March
In like a lion and out like a lamb... Right? Yea, right. I think someone let the lion out too soon and it ate the lamb.
In the last 24 hours we've had freezing rain, sleet, hail, big puffy snow flakes, and small snow pellets (affectionately called 'grapple' by the local news media). Today the sun managed to poke through the clouds for a few (and I do mean a very 'few') moments. 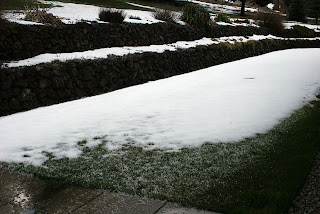 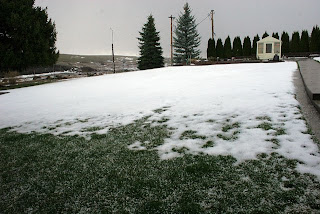 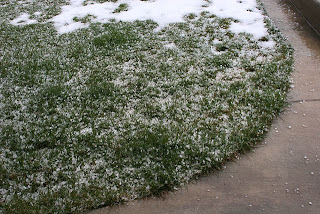 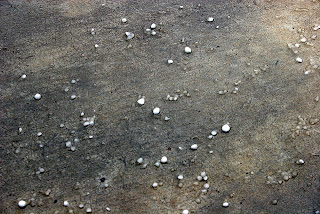 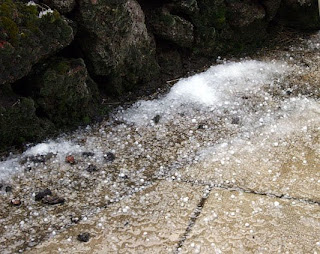 All of this slush makes for treacherous driving conditions with the slipping and sliding and spinning of tires. That's just to get in or out of our driveway. I'll not discuss the carnage on the roads. 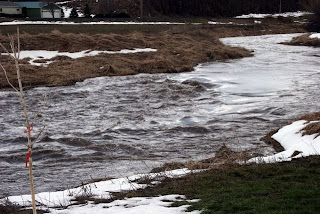 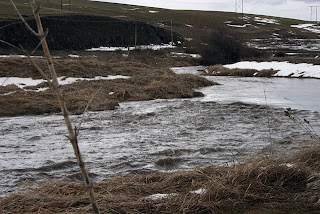 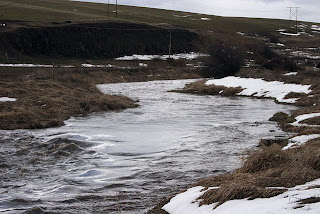 Water in the Union Flat Creek is running like the rapids of the Colorado River. Last week on my way to the mail box in the golf cart I thought I saw some debris floating down the creek. I stopped the cart on the bridge to see. Looking back at me (as if they'd never seen a golf cart before) were six otters. They're much larger creatures than I thought. They were just as curious about the cart as I was about them. Of course I did not have a camera. It would have been an interesting photo. I hope they come again one day.
Today I thought I saw an animal riding the current down the creek and hurried out to see what it was. As it turns out it was not an animal just a very large log bobbing up and down in the rapids. 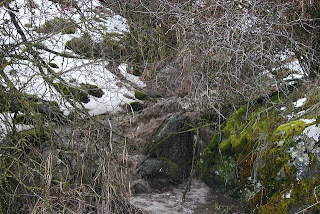 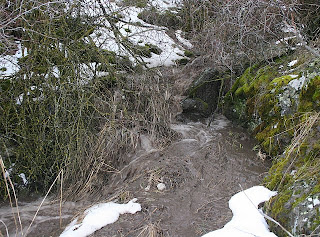 Our seasonal creek is also running. If you look closely you will see the muddy water rushing up over the top of the large rock in the foreground. The photos are just from today's adventure.
I planted the plants in the greenhouse last week. So far the only brave sole has been one little zucchini plant. The rest are wondering when it will be warm enough to poke their little heads out of the soil. Photos will follow as soon as there is something to show besides dirt.

We've had snow and cold with temperatures down into the mid 20's at night. Who would think that anything but warm blooded creatures would be out and about? This little guy was on our patio last night when I took Panda out. Thank goodness that Panda was more interested in the chickens (locked up thankfully) than she was in this little guy. 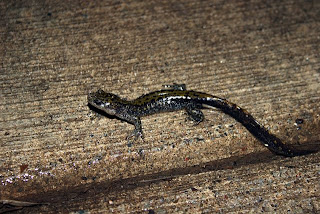 
WEATHER (or Not)
Just when you think (hoping really) that the weather is getting better it snows again. I wish one particular rodent had slept in that day. 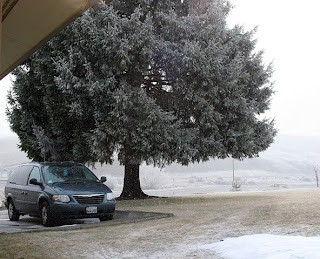 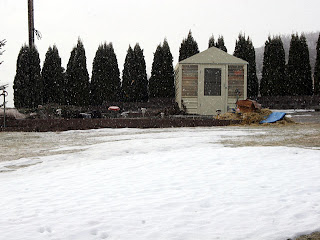 
Merry Christmas to Me
I received a set of Lincoln Logs for Christmas last year. Well, it wasn't really Lincoln Logs but it might as well have been. Roger got me some really nice oak boards (yep, I said boards) all individually wrapped in cellophane. Along with the boards I received some really nice coat hooks (all in one box).
Now though the oversized Lincoln Logs were nice what I really wanted was a coat rack for in the hall so that we could hang our coats up instead of using the furniture as coat racks. He faithfully promised that he would get the 'kit' put together and I would be very happy with the outcome. 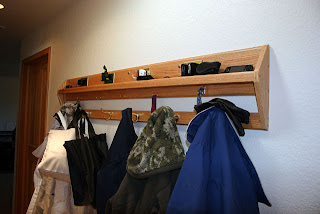 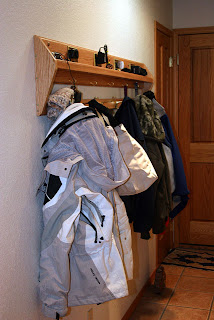 Well, he did and, I am. The small shelf on the top has electrical plugs in it for charging our cell phones. Everything fits very well. It has really come in handy. Thanks Santa ;-)
The Palouse
The weather has been mild here for the last several days and the snow is beginning to melt. I can even go outdoors (though briefly) without getting frost bit. It's actually very pretty. 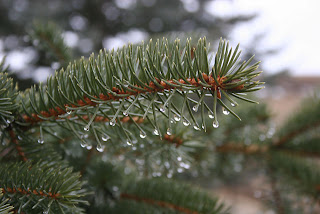 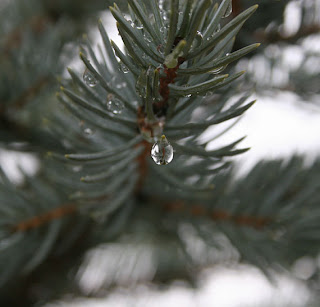 Even the accidental ice sculpture over the pond has even begun to melt. Maybe the fish will come out of hibernation soon. Please hurry up spring. 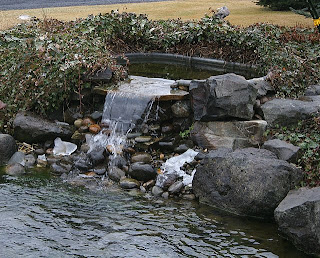 
It blocks the sun and chills the air

It kills the tender leaf

And leaches the color from the landscape. 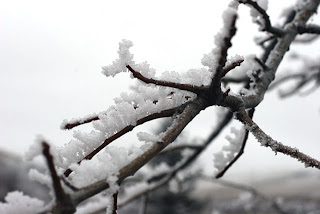 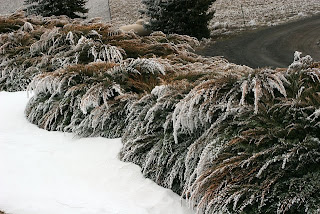 We have had a freezing fog here for the past two weeks. My sister (being from California) asked if this is the way it was going to be for the rest of the winter.

Up until the fog started we had had record breaking snow falls. Of course I told her, "No, the weatherman is predicting snow again." I don't think that is what she wanted to hear.

We've all survived the holidays and we're well into a new year. Hopefully, everyone had a good year in 2008 and we will all have a better year in 2009. Maybe everyone is sufficiently burnt out on politics (I know I am) and we will have a few months peace before the next batch of political zealots start hammering us with the 2012 elections.


As a recap of last year, we had a late spring: I planted my garden in June just before the final snowfall and lost a few plants. I'm not sure where the summer went but by the time my beefsteak tomatoes were starting to get some size (and still being very green) the first frost took out the entire garden.

We had snow up to our eye balls and then some warmer weather to melt it. Then we had flooding because of the blocked storm drains in some areas or snow melting too quickly. Now, with little snow left (in our area) we are contending with the cold - so much easier to navigate in than the snow. We wake each morning to trees, fences, roofs and everything else frosted like a Christmas display.


With temperatures ranging from 23 (or lower) at night to 37 (maybe) during the day it is frosty but still pretty. 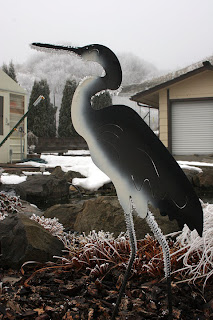 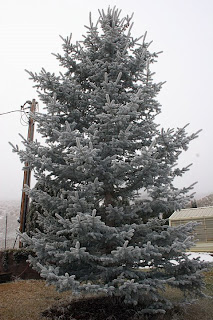 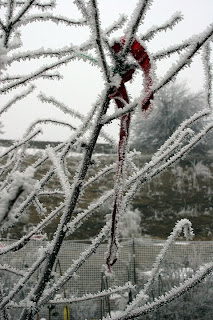 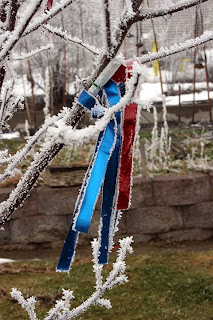 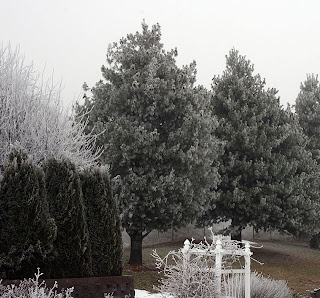 Frosting on the trees 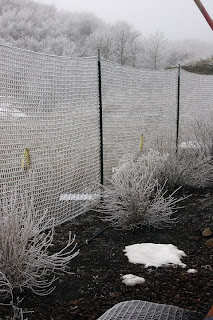 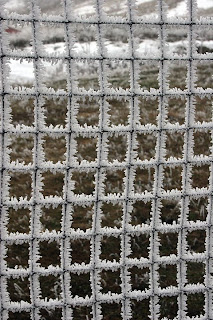 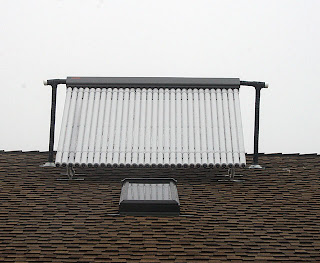 Currently not producing much hot water. 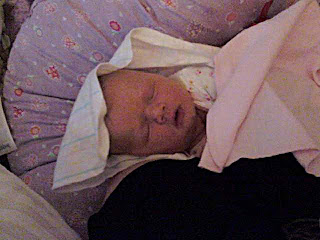